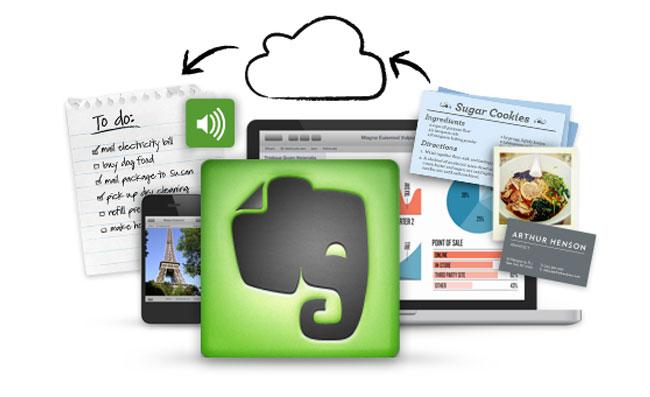 Meeting Planners the world over should soon be witnessing the most amazing phenomena. The sky shall open, the clouds will part, and a heavenly choir will begin to sing Abba songs….. OK, maybe not ABBA, but meeting planners should be cranked up anyway….

Evernote 5 has dropped and will be rolling out in an automatic update next week.

While we at PlannerWire love automatic updates (can you smell that?? That smells like sarcasm), we are not about to wait because we knew a little about the new Evernote and we’re like little kids waiting to get it installed. We are so anxious that I am actually installing Evernote 5 as I type this post. For those of you who think I just said that to sound “cool” or “hip”, nope, I really am that much of an uber-geek.

Here is the screenshot to prove it… 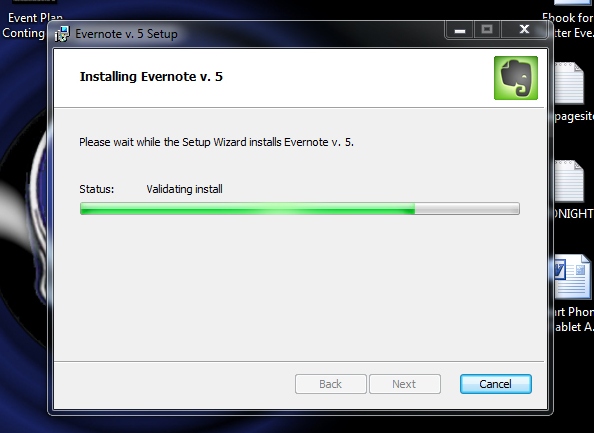 I know right…. have not even installed this sucker and I am already writing a post about it.

OK! It’s finished and we are looking at the NEW EVERNOTE. Wow. There are some big differences. The first thing that I am noticing is that the new interface is wildly flat…. .yes, the new flat design style. I am also noticing that the new Evernote is a whole heck-of-a-lot-less cluttered.

Less clutter seems to be  baked in which is how I advise all of my clients to work in Evernote.

So.. what is the awesome sauce, why have I been twitchy in anticipation? Well, they are making Evernote a whole lot more efficient and while this post is not a review (I will do one of those in a couple of weeks after I am up to speed on the changes), I am highlighting the new features.

First, a screenshot of 5 and then some of the highlights.

The new Evernote look is totally awesome; Clean and simple and cool and betterer.

With Evernote 5, we’re embracing modern aesthetics to bring you a beautiful, flat interface that feels at home on multiple versions of Windows. By stripping unnecessary elements, we’ve made it easier to browse and create notes.

Seriously… this shit was already fast, not sure how they could make it faster.

The simpler look isn’t the only thing that makes using Evernote better. We’ve also added new features to help you quickly get to where you need to be.

Oh look! The shortcuts are at the top!

At the top of the left panel is the Shortcuts area. Think of Shortcuts as your quick access point for things that you do frequently. Drag just about anything into Shortcuts, including notes, notebooks (personal or Business), tags, and Saved Searches. Shortcuts are great for jumping to notes from recurring meetings, big work or personal projects, travel planning, and more. No need to search or browse.

Thank you Evernote… This is something this meeting professional needs, you should see my desk.

We find that this simplified view provides greater focus on the task at hand.

By clicking on the alarm clock, you’ll pin the selected note into the Reminder list at the top of the Note List, create a to-do item for that note and add alarms to make sure your notes are done on time.

One of the big changes you’ll find in Evernote 5 is the way that notes are displayed in the Note List. When you click on the Notes section in the left panel, we show all the notes you have access to in a single list. This includes notes that you’ve created, together with notes from shared and Evernote Business notebooks. The benefit of this approach is that you now see everything that matters without needing to go through multiple steps.

OK, I am game, have to try before I report though. My guess is that it adds a Pinterest like feel to notes.

The new Card View mode displays notes as beautiful square cards, which is a great way to visually scan through your notes, especially ones with images.

I just clicked to check out the new note “look”, looks kinda the same to me but really, I never complained about the old note view.

The redesigned Note Editor panel perfectly frames your note to let the content shine. For short notes, the frame stays tight with the bottom giving you a better sense of where the note ends. Double click on a note in the Note List to pop it out for distraction-free reading and composition.

AWW HELL YEAH. This alone is worth upgrading to premium. When you have note “A” open, this feature says “psssst, hey buddy, wanna see another cool note, we think it is better than that note you are looking at”

Our Augmented Intelligence team is devoted to making your notes smarter and your Evernote experience more magical. The Related Notes Premium feature is one of their projects. As you type or view a note, Evernote begins searching your account for items that are similar or related to what’s in the current note.

Notes on a Map

Notes on a map sounds a whole lot better than Snakes on a Plane and I do believe that this feature is going to be the shnizzzle for meeting peeps and should change the way that we do our site inspections (at least it will for me). All notes are now Geo-Tagged. Just imagine what this does for site inspections. Just imagine…. Snap a pic with Evernote on your phone and there it is with the location. I can just smell the awesome.

If you’ve ever wondered where you were when you had that great idea or delicious meal, the new Atlas view will show you. When you use Evernote on your phone, tablet, and some desktops, the app adds your location to the note data. In the beautiful Atlas view, you’ll see these notes plotted on a map of the world.

My first impression is that Evernote has clobbered this one and hit a home run that was not just good, it was monumental and has flown out of Wrigley Field and is bouncing down Waveland Avenue on its way to lake Michigan…. can you see it out there?

Below is a video that the Evernote team put together introducing Evernote 5. Really. Watch it. It is like 2 flipping minutes long. You are going to tell me that 2 whole minutes out of your day is going to wreck your ju-ju. It isn’t, so just do it because I think that Evernote is the single greatest tech tool that a meeting planner can have. Evernote is more important than FOOD*.

*The editors of PlannerWire used this phrase for dramatic effect, we encourage you to eat healthy and to not believe everything you hear on the internet, please see this video for internet reality clarification.

Now… you wanna get your copy, go for it, Evernote 5 is waiting.