One Reason Exhibitors Hate Your Conference or Tradeshow 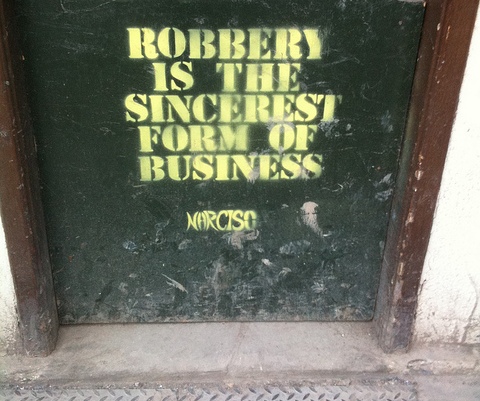 Every exhibitor in the world loves exhibiting but hates to exhibit…

HUH?? You ask, what the hell does that mean.

What I mean is that they enjoy being on the floor and getting to know their customers and potential clients. Even the exhibitors that are not that good at exhibiting can find joy in the personal interaction.

What they hate is the process that it takes to get them there.

Have a look at these internet costs from a major convention center in the U.S.

This is shameful, this is ridiculous and this is ROBBERY. It really is. There is NO reason that internet service should cost this much and any argument that you can give is a load of shit. You are fibbing.

Do convention centers, hotels, associations and show producers really think that we are this freaking stupid? Do they not realize that we have access to the same magical internet that they are trying to sell us?

Let’s see what I can do with the magical internet in my office……I can compare what they are charging with what something actually costs.

Regarding the cost of the actual internet service, I have a thought for everyone:

In fact, I would venture that there are very few exhibitors that are looking for more than this type of speed so please Mr or Mrs convention center robber-baron, save your shit-ass excuse  for someone that will actually believe your load of crap.

If you think that my Holiday Inn Express analogy is off the mark, let me explain.

Imagine that each room is a 10×10 exhibitor… there you go, it is the same thing laid out in the same way….

This is why no convention center’s argument can possibly hold water… period.

There are exceptions to the rule, for instance, if I checked into the Holiday Inn Express and needed more internet than they provided, yes of course it would be expensive but the fact remains that 99% of exhibitors would only need what the what the Holiday Inn is offering.

Well Keith… what about giant shows with 4000 exhibitors??

OK, What about it. I Hate to tell you but there are hotels out there with 4000 rooms and they deliver the internet just fine and when they do charge…. it is $10 or $20 bucks, not THOUSANDS of dollars. The MGM Grand in Vegas has like 10,000 rooms and they do not charge $1,000 for internet in the rooms (but they probably charge $1000 in the convention center).

You want to know the real reason the internet costs are so high… it is because everyone and their brother is making a nickle off of the service and they know that they have you trapped so they GOUGE YOU.

I would call this unethical, immoral, disgusting and even illegal in some parts…yet no one does a thing about it, it has been this way for years and it is not going to change anytime soon. We are like sheep.

There are even cases where the association that you are supporting with your sponsorship and exhibiting dollars are double dipping on services like this. They are robbing you with a smile on the front end and sticking a knife in you after you walk by….

With friends like these, you may actually be better off with your enemies, at least you know where you stand.

This is one of the shames of the meeting and event industry and yet exhibitors are so used to taking it that they have stopped complaining and have quietly stopped exhibiting.

There is nothing wrong with making money, the service providers deserve to get paid. What they are not entitled too is gouging the exhibitor because they have a monopoly and because they can.

If there is a convention center person out there that would like to explain why an 8 port hub rental is 3 times the purchase price, the comment section is below…you can’t blame it on labor costs, they are extra.

While you are at it, please explain WHY internet costs are so expensive. Do you use gold plated wire, do the Internet Fairies deliver such a magical internet experience that makes every booth visitor buy whatever the exhibitor is selling or is there another reason?

Keith is the Managing Partner of i3 Events but is most widely known as the outspoken publisher of the event industry blog PlannerWire. In addition to co-hosting the Bullet List and Event Tech Pull Up Podcasts, he has been featured in Plan Your Meetings, Associations Now, Convene, Event Solutions, and has appeared on the cover of Midwest Meetings Magazine.
PrevPreviousHurricane Double Shot Weekend – Meeting Planner Music Club
NextHow to Fight Those Sky-High Internet CostsNext