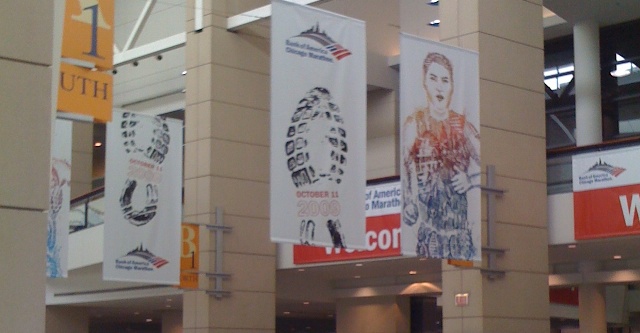 I have heaped a fair share of blame on unions for their part in the rising costs of trade show exhibiting for a long time, In fact, I have a posts where I call out all of the sides to rethink how they are working together at McCormick Place here in Chicago.

I will lay blame where it is due and now, it is not the unions, not by a long shot.

A couple of weeks ago (yes, I am running behind), @gregruby and @michaelmccurry shared a couple of articles that show that although the unions have mostly played ball on cost cutting measures, costs at McCormick Place have not decreased and in some cases, costs have actually gone up.

Having a trade show or large conference here in Chicago is a pain in the ass, getting harder and more difficult.

I do not blame planners that take a pass on Chicago, I really don’t…. I would. Let’s find out where your money is going.

The problem is not with the unions, your money is going to the show organizers and general contractors.

The next time you want to bitch about a union guy, why not read this investigative piece by Crain’s Chicago Business. Your union carpenter or rigger is not the one getting rich off of your booth installation and that person pushing the vacuum, read below because exhibitors and sponsors are getting wise to the game, here is an excerpt (read the full article here):

Denise Canavan surveys what was left of her exhibit booth on the vast show floor of the McCormick Place West Building. “You see this carpeting?” she says. “I only had it vacuumed once during the show, because it cost me $600.”

Ms. Canavan, an exhibit manager at Chelmsford, Mass.-based Zoll Medical Corp., makers of defibrillators and other cardiac devices, was packing up after three days at the National Teaching Institute and Critical-Care Exposition in early May. Don’t get her started on the cost of being an exhibitor. While she’s had her issues with McCormick Place unions, the hefty fees charged by Freeman, the show’s general contractor, and the trade association itself are what pushed her bill past $160,000.

The ones making money are the show organizer and the companies that they contract with for show services.

They take the labor rates, mark them up once, look at them and then mark them up again. They are the ones that are making shows expensive. The show organizers are treating show services as a profit center.

Yes, your show organizer, trade association or show host is treating you like a cash machine.

In fact, this is such an issue that both sides refused to comment for the Crain’s article citing the typical B.S. excuses, here is another snip:

Few trade associations would reveal details of their relationships with the general contractors. “What we negotiate contractually with Freeman, I can’t talk about,” says Steven Drew, vice-president of the Oak Brook-based Radiological Society of North America, which hosts one of McCormick Place’s biggest shows. But he acknowledged it is “standard practice” for contractors to pay some association expenses.

GES and Freeman won’t discuss specific arrangements, citing proprietary and competitive reasons. “Our agreements are varied, and they’re private,” says John Patronski, executive vice-president at GES. But, he adds, “We offer to sit down with any exhibitor and give them advice for cost savings.”

They offer to sit down with an exhibitor and give them advice? Here let me have $4000.00 and I will tell you that the best advice is not to exhibit in Chicago…. how is that for some advice.

How do we know it is not the Unions?

Good question, here are a couple snips from Chicago Magazine and their article, McCormick Place, Trade Shows, and Unions: The Latest Labor Battle. They point out the costs and what they are compared between centers… that is all the proof you need.

Which brings us back to James Ylesia Jr.’s excellent investigation for Crain’s. What he found was that while union-driven labor costs do play some role in making McCormick Place a comparatively expensive place to have an expo, they’re not nearly the whole story:

Average drayage rates at Orlando and Las Vegas convention centers are 42% and 51% lower than McCormick Place, respectively, according to a 2009 Tradeshow Week survey. GES and Freeman say one reason is that labor costs are lower in those cities, but drayage is also 38% cheaper at the Donald E. Stephens Convention Center in Rosemont, which operates under the same labor agreements as McCormick Place.

GES and Freeman are the two contractors that dominate business at McCormick Place; “drayage” is the fee for moving booth materials to and from the shows.

So where is your money going? You should ask for a breakdown of how the money is allocated. That would be interesting, but it goes like this, there is the labor cost (fixed) and then what the show services people add to the bill and then what actual show adds to the bill… that is your cost (there may be some other hands in the mix, who knows).

You are getting more mark up than my first grade writing assignment and that was a lot of red.

You cannot offset lower attendance numbers by screwing your exhibitors, it is not cool.

Now, it would be cool if it was disclosed… but it isn’t, show organizers hide the fact that this is a money making scheme and the show contractor is going to keep their mouth shut because they need to mark up the services to make money because they are the middle man.

It is about time that show organizers put the value back into their events. New revenue is not hard to find when you are creative and know what attendees want. Create value and you will have to beat the exhibitors off with a stick. When you have that many exhibitors, you can lower the costs to what they should be, you break even without breaking your poor exhibitors.

Just something to think about.

Want to read even more? here is another piece, over at the Chicago Tribune, titled:

Stop robbing your exhibitors and blaming the everyone else, we are not stupid.. it does not cost that much to clean a carpet or hang a banner, we know it, so stop with the crap.

There is enough blame to go around and this time let’s place the blame where it is deserved.