This little tweet just came flowing down the stream like a leaf on a lazy river, it is from Michael at EventGenuity about a product he purchased, the APEX Toolbox by Office Ready.

A post like this can wreck your event, conference or association’s App, Software or other tech launch in a matter of minutes and the damage may not be able to be undone. 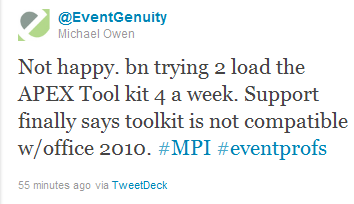 First, if you design anything that is supposed to work with Microsoft Office, don’t be lazy, make it compatible with all versions. I use Office 2007 on this machine and 2010 on another so you have to speak to the both of them or I am not going to use your stuff. PERIOD.

This is such a common mistake and I see it all of the time.

The moral is this, not every meeting and event professional uses the same software, you have to speak to them all. Not everyone uses the same operating system, some are PCs, some are Macs and yes, some even use Linux (I have a Linux machine for testing— DO YOU?).

Before you have a launch, before you try and sell something to meeting and event planners, you had better cover your ass and make sure the freaking thing works or you will get frustrated tweets, blog posts like this and old fashioned word of mouth doing damage that you have to control (and they should start controlling this now).

I won’t get this product (not that I would) because it appears, from a reputable source, that it won’t work out of the box.

I would not buy a car that won’t start, why would I spend money on your software doesn’t work.