Updating Post – May of 2012. I forgot to come back and say that the folks that created Tweet Old Post have fixed the issue that was causing websites to crash. Go forth and use TweetOldPost to its fullest extent. You can see the tutorial that I created on how to install TweetOldPost on your WordPress event website.

>>Updating this post on August 23, 2011.. for those of you that follow me on Twitter, you may have noticed that I sent out a tweet that was something like – “Site down and brought back in 3 minutes, a record”. After investigating, I determined that what caused the site to crash like a Moldovian Airliner was one of my favorite plugins…TweetOldPost.

I love this post and did not want to kick it to the curb, so I did a little investigating and found out that I was not alone. It was their latest update that was the culprit.

I am sure that they will fix whatever is causing the mess so until they do, I would recommend this post by Tint Network that talks about the issues and has the link to an older version of the plugin that you can install until they straighten this shit out.

Using WordPress, you have an amazing array of tools to help you drive traffic to your conference or event blog. Most of these plugins deal with the here and now, what is happening at this moment; you publish a post, there are plugins that will post it to twitter, send it to Facebook, pretty much everything but make your coffee and beam the post into space.

But did you know that one of the most effective traffic builders is your old content, the stuff that ordinarily would be sitting on the virtual shelf gathering electronic dust.

Normally, you would have to manually go back into your old posts and hand pick some selections to send out via twitter,  but there is another way, an automated way that gives you control over what gets sent out and can help drive traffic and help you find new followers. 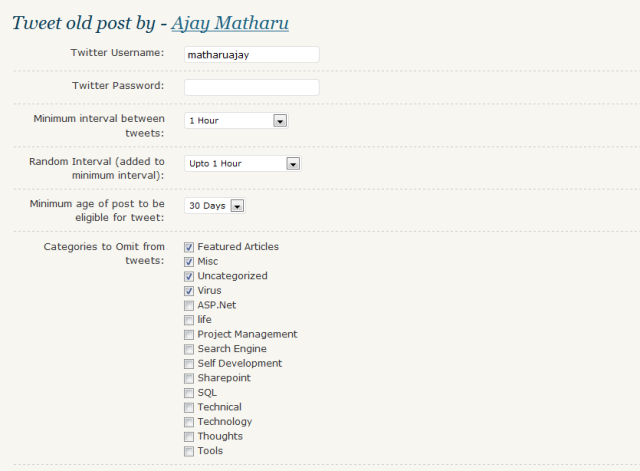 Tweet Old Posts randomly picks your older posts based on the interval specified by you. What I like about this plugin is that you are in control of how often it posts and from what category. It is a slick little unit and will give new life to forgotten posts.

If you are on the WordPress Platform, this is one plugin that you should install today!