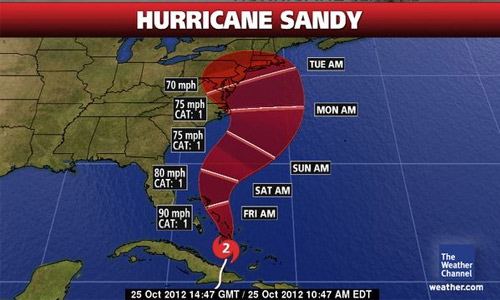 Happy Friday people, it seems like it has been a whole week since we were last here.

To all of my family, friends, clients, and colleagues on the East Coast stay safe, Hurricane Sandy is going to be nasty. For real people, they are calling this thing “Frankenstorm”…. not “storm of the century”, “once in a lifetime”… .they are calling it FRANKENSTORM. I know that some of my friends (and family) think it would be cool to go out and “check it out”… please, just stay in this time, I am getting bad ju-ju from this one.

On a lighter note, this past week, I had an awesome time learning about Norfolk, VA and this week I will be heading to better weather as I head off to another site visit in Long Beach, CA. I will keep the final destination under wraps until we (hopefully) throw out an amazing picture on Monday (no pressure).

Anyway, here are 5 amazing posts that you may have missed this week.

Facebook turns down the volume, makes you pay to turn it back up

Love Bob, love his blog and he is right, maybe it is time we all evaluate how we use social networks because, frankly, I believe that we may be witnessing the “jumping of the shark” by Facebook.

For me, it’s time re-evaluate my use of social networks and how I keep fans, followers and reader informed and involved. This is important for me but also for the businesses I work with.

Thanks to Jeff for saying what I have been thinking for a long time. I just did not have the proof to back it up; now I do. With the potential shark jumping escapades of Facebook and the reluctance of the common folk to adopt Google+, Twitter may be one of the best bets for conferences and events.

Greenhow also noted that Twitter use among U.S. teens has doubled in less than two years.There are now more than 200 million active users … posting more than 175 million tweets a day.

Microsoft Launches Windows 8: So Different, Yet Just The Same?

I am totally stoked for Windows 8. I will be ordering my copy of 8 this afternoon. What most people do not realize is that Microsoft has had a lot of successes lately from Windows 7 to Skydrive.

What’s clear, though, is Microsoft needs a hit.

In future social media will give more emphasis on the online-privacy. Because privacy is one of the most controversial issues among the social media networks, people who involved with social media have the threat to assail their privacy than the others. It is the prime duty of the social media to protect the privacy of its users.

The Difference Between Meeting Planners and Suppliers

With a few exceptions, I hate forums and “groups” on most of the social networks. I find them a gigantic waste of time filled with people trying to sell me shit and when they are not doing it directly, they are using my membership in the group to find me in other ways. Ugg. In my opinion, outbound sales smells like a dead fish and gets you nowhere.

Whatever the reason this unfortunately means that for the most part they (suppliers) don’t understand that sales has shifted to an inbound marketing model. Planners are drawn to destinations, hotels and venues by the quality of content that is available online, including through social media. If directors of sales and marketing don’t know how it works how can they possibly devise the right strategies to attract new meetings and events business? There is a serious disconnect.

There we go. I hope that you have made the most of this week because another one is just around the corner!