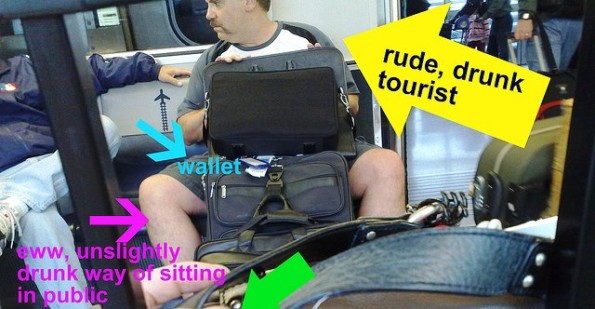 So, a report came out yesterday and lists American’s as the worst tourists in the world.

Produced by LivingSocial and Mandala Research, the survey polled some 5,600 respondents from five countries and it is basically a load of crap. No country has the worst tourists in the world. I would venture to say that there are idiots from every country on the globe…. every single one.

I have traveled near and far in my job as a meeting and event planner and when I run into Americans, most are doing their best to blend in, act normal and be good world citizens, yet I always manage to run into one American moron acting like an idiot looking for a hamburger in Nepal or Chicken Fried Steak in Tanzania. I shake my head, smile and have a good laugh with one of the locals that happens to be witnessing this act of stupidity in all of its red, white and blue glory.

Yes, I admit,  there is always one foolish American in the bunch but the same can be said of the Germans, the Italians, the Chinese, the Vietnamese, the Australians, the Irish, the French, the Swiss, The Panamanians, The Costa Ricans and the South Africans; Every country has an ass or two hanging around.

90% of the people that are out there are good, decent people that travel the world with grace and style. Of course there is always one of them that is a freaking jerk; an embarrassment to their people and their culture.

What people forget is that if someone is a jerk when the travel the world, they are probably a jerk at home too. These same people are probably hated as much by their neighbors as they are by the locals in whatever country they landed in. I can tell you that my neighbor is a douche-bag because he lets his dog crap all over the neighborhood and the guy across the street gets drunk and yells at the wall. I am sure that these wonders of nature act like this when they travel too.

When you see a survey of “the worst” it is usually, secretly, the “worst one person” and this is what makes these polls stupid. What the poll is telling you is that some person in a far off land had a bad experience meeting an American and now he says “Americans” are the WORST, and another met a dickhead who happened to be German and now all “Germans” are the WORST and some other person met an Indian person who was loud and now all “Indians” are the WORST.

The reality is there are just jerks in the world and if you are looking for an asshole, you can usually find one, but what you miss are all of the roses that you trampled over in your rush to find a pile of shit.